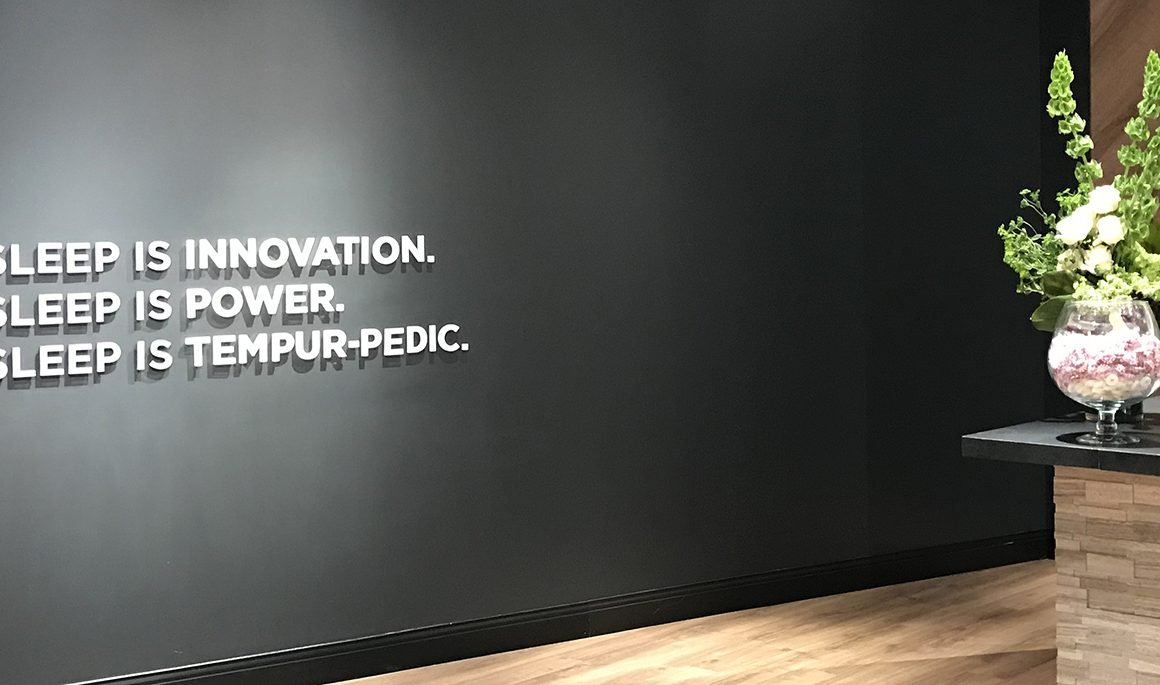 Tempur-Pedic is generally considered to be the top mattress brand in the world. It’s a profitable line and an industry powerhouse. Our client, Tempur Sealy, has been working hard to keep it that way.

They’ve built a team of agencies who are redefining Tempur-Pedic, led by the international branding firm Landor. (I can’t complain — we successfully rebranded both PosturePedic and Sealy for the company over the last several years, and we’ve been the lead agency this year on some other amazing projects for this client.) 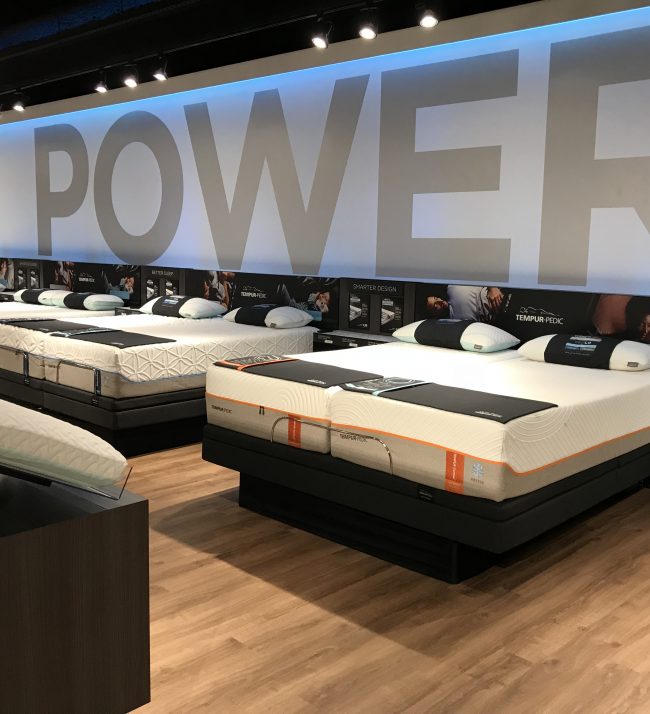 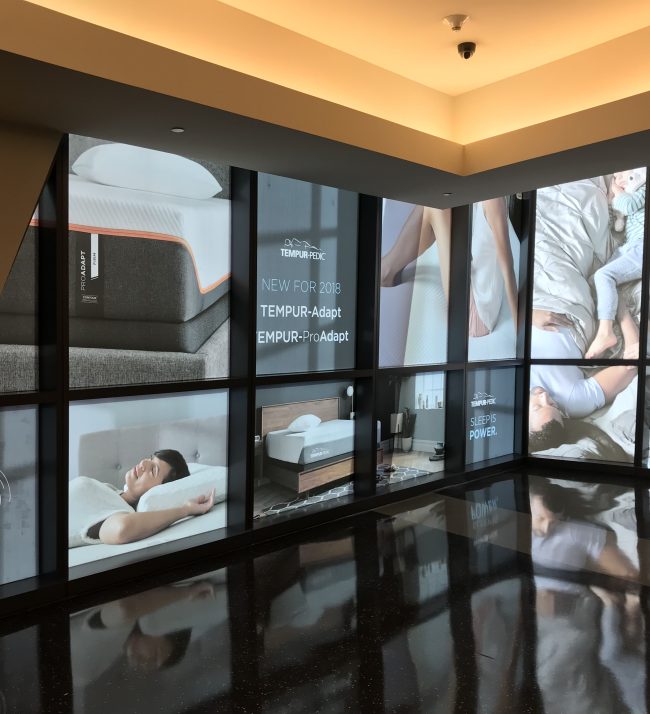 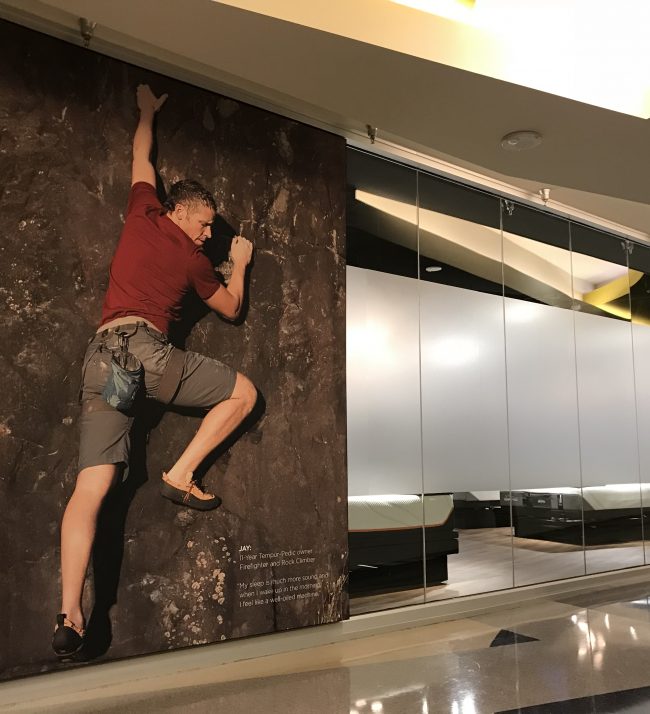 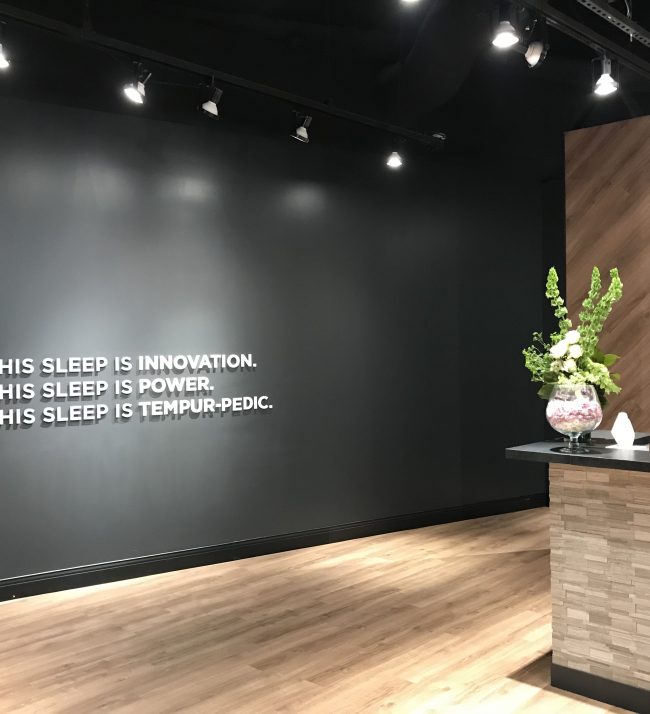 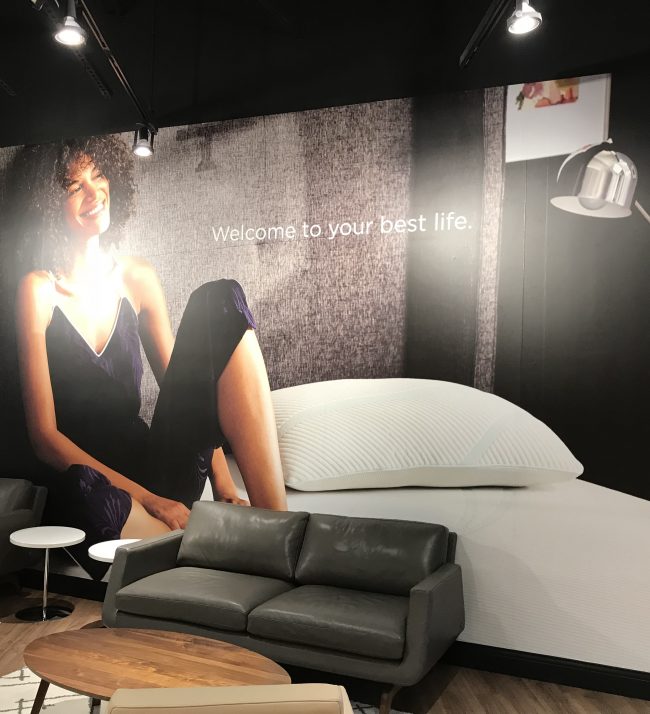 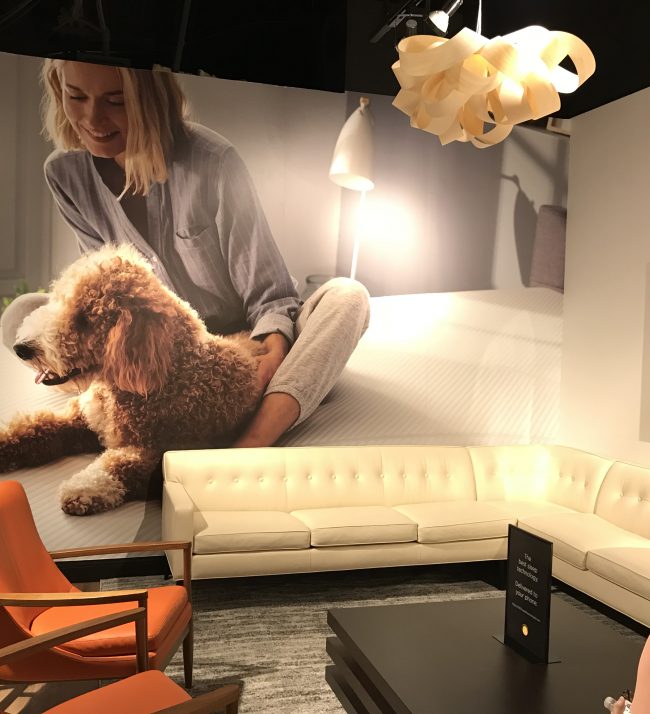 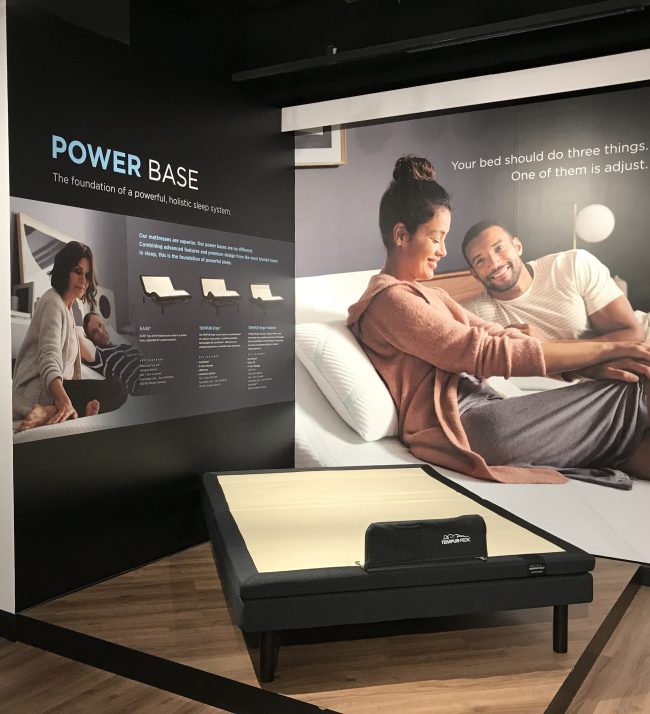 It’s both flattering and fascinating to be part of the Tempur-Pedic team with these other talented design and advertising agencies.

As part of the new brand introduction, we helped design the permanent Tempur-Pedic showroom at Las Vegas World Market Center. Reception to the new positioning and graphic approach was universally enthusiastic, from retailers and sales staff alike. More to come! 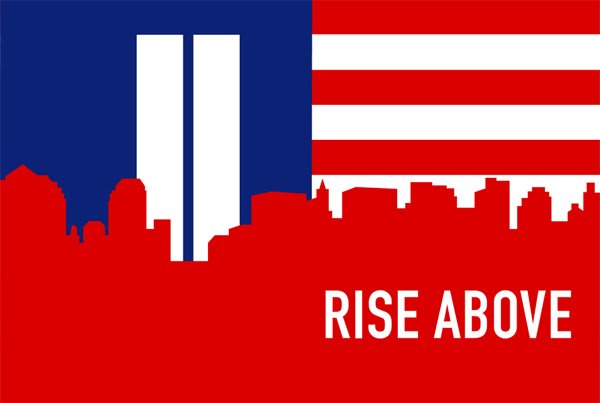 New Yorkers have reason to be angry today. As do all of us here in the U.S. But 16 years later, a more thoughtful approach has arisen. Here are two New York voices I admire. I know there are many, many more.

My friend, designer Karen Simon, whose image graces this post:

Wishing you a peaceful and contemplative day.
Move through today with grace and love.
Share your heart with those around you.

It’s tempting to be oppositional. To see the different as the other. To dominate, to win, to move up as others move down (because in the zero sum game that we’ve built around us, that’s the only way).

But a networked world, one based on connection—one held together by the sheerest gossamer—can’t tolerate the tension and pain that bullying and dominance require.

An alternative is with-ness.

We’re weaving something every single day, but entropy and fear leads to a raveling that can undo all of it.

I’ve been thinking about the power of helping vs. the power of fighting. Al Qaida’s currently working hard in Yemen (as AQAP) to fix broken sewer systems and otherwise help the local populace improve their lives. And not worrying much about imposing sharia law.

America used to do that as our hearts-and-minds tactic throughout the world. Now, we throw money at military “solutions” and isolate ourselves while threatening and bullying.

What do you think works better to calm an angry rebellion or undermine the power of a demagogue? Bombs? Or food, water, shelter and economic help?

The answer seems obvious to me. 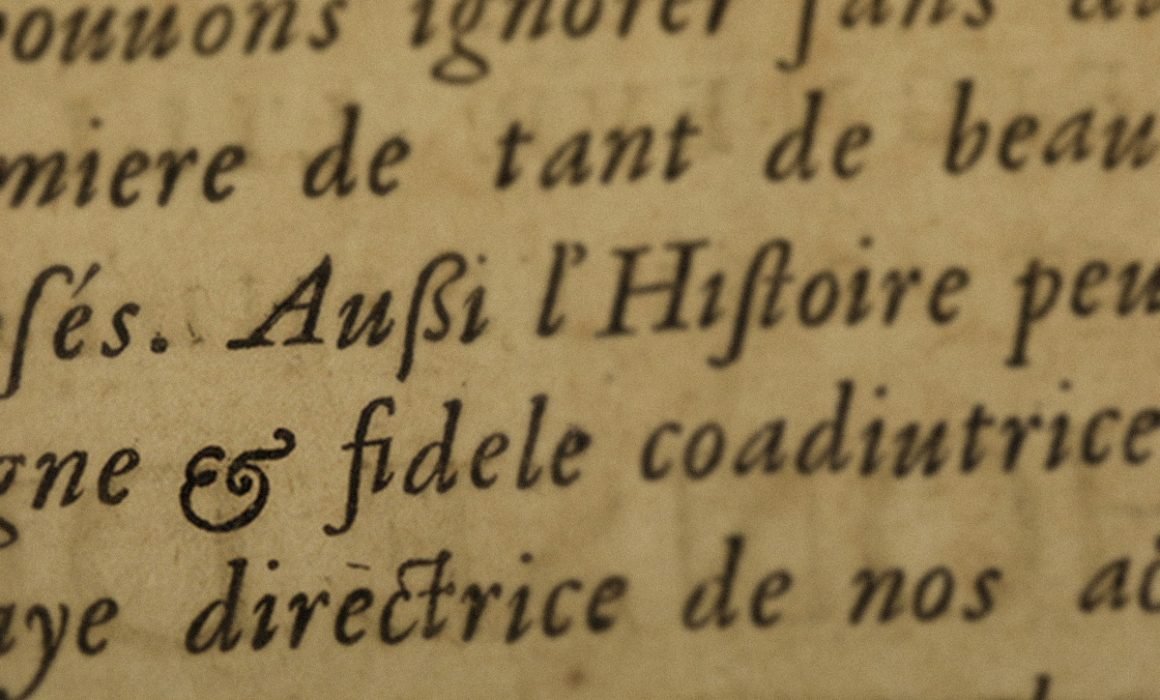 I didn’t even realize there was such a thing. But apparently it’s the real deal. To celebrate, I’m posting a logo we designed for UCLArts & Healing.

Their nonprofit educational organization is all about creativity, individuality and the additive benefits that derive from the arts. So our logo for them changes with each application — letterhead, envelope, business card, website, flyers, brochures and so on.

It adds up to a vibrant visual identity. And it’s all about ampersands! 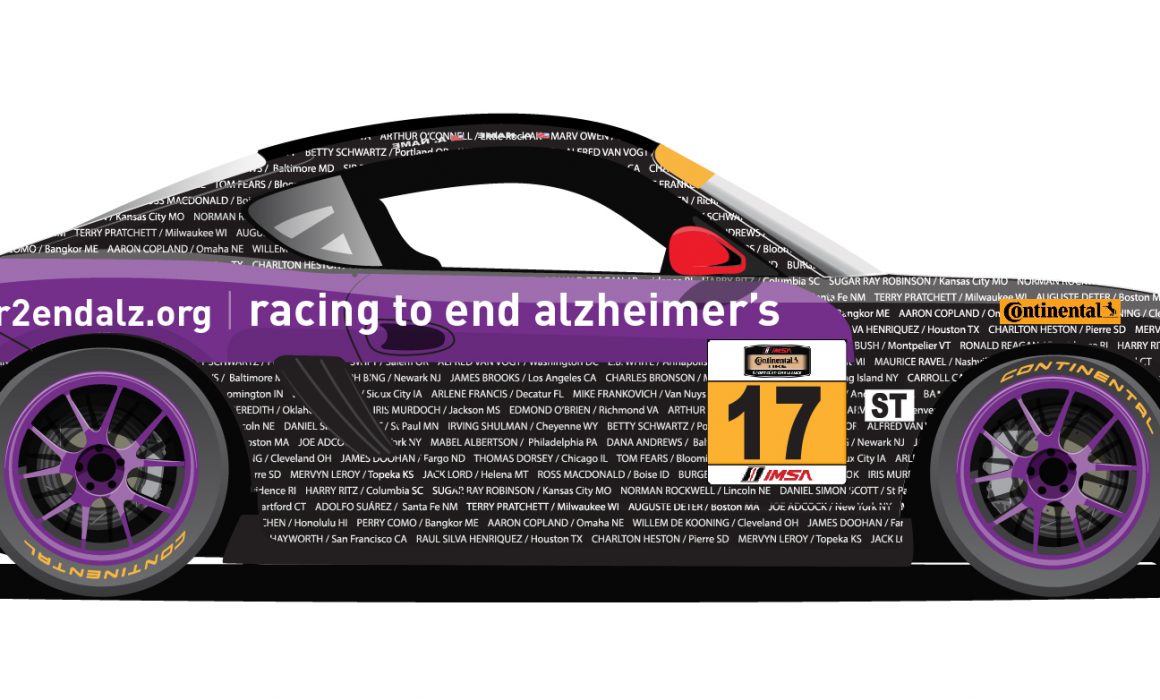 Racing to End Alzheimer’s is barreling along toward the midnight September 3 checkered flag, when contributions have to be in to secure a place on our championship #17 Porsche Cayman. With the help of golfer Rickie Fowler who co-sponsors the car, many members of the UCLA women’s golf team, University of Washington Women’s Golf, and our thousands of supporters on Facebook, we can take a major step toward ending Alzheimer’s disease. 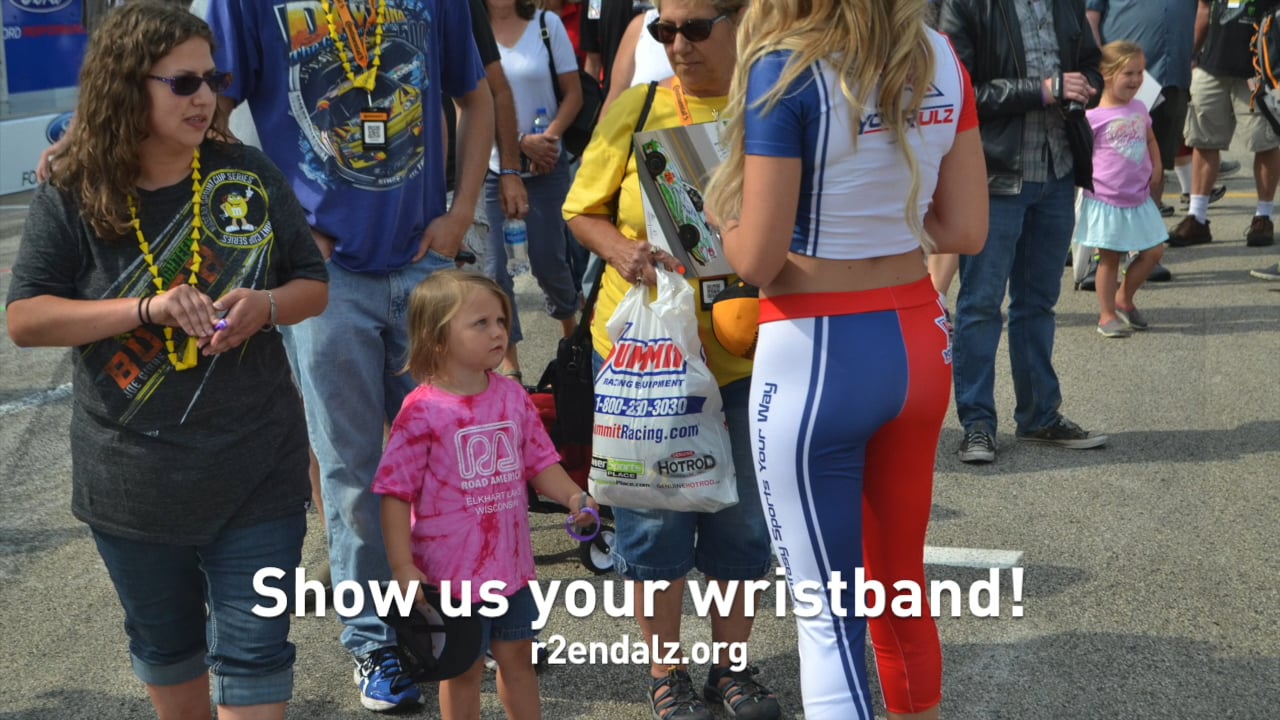 5.5 million Americans are affected by Alzheimer’s. Worldwide, it hits 47 million. Add families to that number and it impacts some 200 million people. That’s a lot of misery, uncertainty, pain and loss. It needs to stop.

Luckily, we’re closing in on a solution. But progress is directly related to funding, and anything we can do to accelerate the end of Alzheimer’s and dementia is worth doing.

So if this moves you to act, please go to r2endalz.org and donate.

If you’d like to honor a loved one in a brand new way, great! When we remove all the corporate logos and replace them with the names of our donors’ grandparents, parents and friends, for $250 you can add someone you care about — or care for.

If you just want to help, even a small donation is welcome. And all the money we raise goes straight to research and family support. Legistics, our wonderful client, is absorbing all the marketing and execution costs for this campaign.

Watch on Fox Sports FS1 when our car, covered in names, competes in the IMSA Continental Tire SportsCar Challenge at Mazda Raceway Laguna Seca on September 23.

Please share this. And check out the ways you can make a difference at r2endalz.org. Thanks! 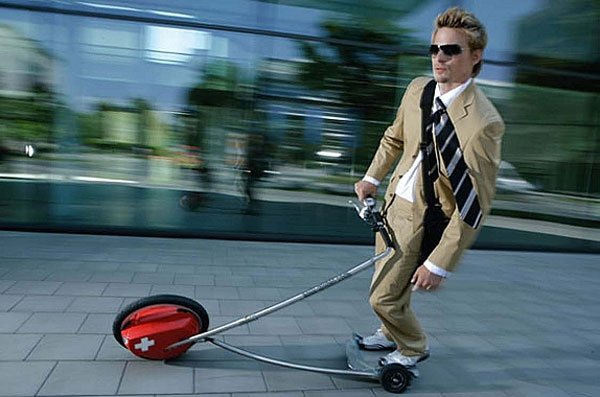 Part of the art of marketing is making something cool, but not too cool.

Research shows that we gravitate toward the familiar, but that we’re also bored by it. We cherish the new, but we’re also scared of it. The art is in finding something innovative that still has roots in things we already trust and understand.

This is why Apple so rarely pioneers technology and, instead, leverages things that have already been tried and haven’t yet been optimized, Then they nail it.

And it’s why truly innovative companies can be “ahead of their time” and tank.

An article in The Atlantic provides some interesting examples in the context of a long piece on the brilliant designer Raymond Loewy who coined the term MAYA (“Most Advanced Yet Acceptable”) and said: “To sell something surprising, make it familiar; and to sell something familiar, make it surprising.”

There’s plenty of science to back this up:

In 2014, a team of researchers from Harvard University and Northeastern University wanted to know exactly what sorts of proposals were most likely to win funding from prestigious institutions such as the National Institutes of Health—safely familiar proposals, or extremely novel ones? They prepared about 150 research proposals and gave each one a novelty score. Then they recruited 142 world-class scientists to evaluate the projects.

The most-novel proposals got the worst ratings. Exceedingly familiar proposals fared a bit better, but they still received low scores. “Everyone dislikes novelty,” Karim Lakhani, a co-author, explained to me, and “experts tend to be overcritical of proposals in their own domain.” The highest evaluation scores went to submissions that were deemed slightly new. There is an “optimal newness” for ideas, Lakhani said—advanced yet acceptable.

We can lament our intolerance for innovation. But it seems that understanding it is a good place to start if you want to effect change.

Read more, including how Spotify figured out that Discover Weekly playlists should include songs you already know.

Last Saturday marked the launch of Racing to End Alzheimer’s, a new foundation designed to help fund research into this debilitating disease, as well as to support programs for families who are dealing with it.

The campaign debuted with redesigned graphics for this season installed on the Legistics-sponsored #17 Porsche Cayman. The new livery highlights Racing to End Alzheimer’s and the brand new website at r2endalz.org. Celebrity golfer and co-sponsor Rickie Fowler will be helping to promote the cause.

But the new summer look only lasts until the fall. At Mazda Raceway Laguna Seca on September 23, 2017, the sponsor logos will be stripped from the car and it will be covered in matte black. For $250, donors can honor a loved one affected by Alzheimer’s or other forms of dementia, with their name and hometown emblazoned on the Porsche as it competes in the IMSA Continental Tire SportsCar Challenge.

All elements of the campaign, including the car, were designed by FreeAssociates. Check out the ways you can make a difference at r2endalz.org. 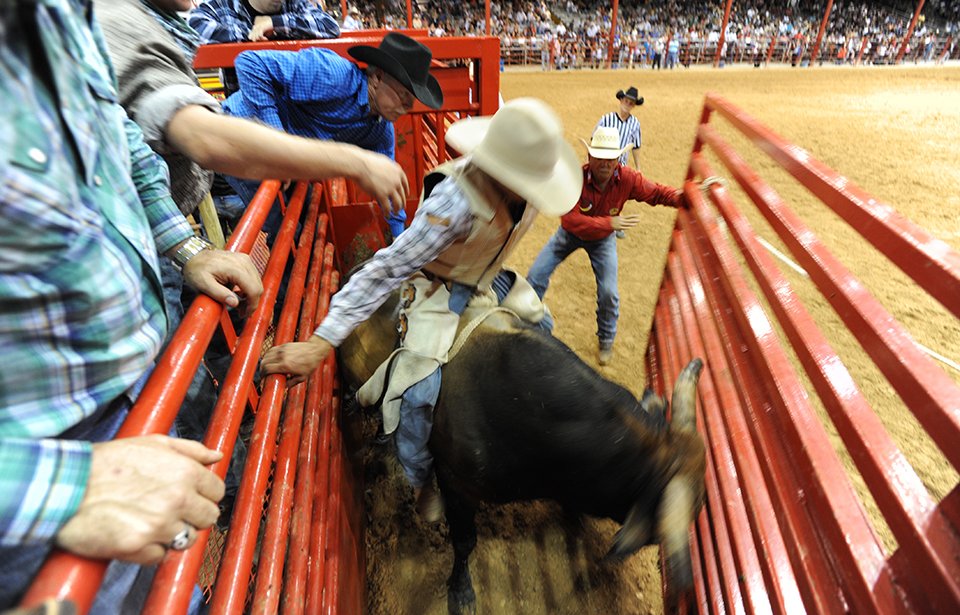 Our client Tempur Sealy International (makers of Tempur-Pedic, Sealy and Stearns & Foster mattresses) recently released their quarterly results Despite discontinuing sales to the huge national retail chain Mattress Firm, they’re doing pretty well. Sales to the rest of their retailers are up 15% overall, and margins on those sales should be up, too.

While we are just a small sliver of a huge team, we like to think at least a part of that uptick is the result of the refresh of the Sealy brand we designed, which came out of the gate at the start of this year. With fresh new product graphics, point-of-sale displays, and a strong presentation to retail buyers, the 135-year-old Sealy brand has been elevated and reinvigorated.

“This represents the eighth consecutive quarter of double-digit adjusted EPS growth,” said Scott Thompson, chair and chief executive officer. “These solid first-quarter results are a byproduct of the team’s focus on our long-term initiatives and the overall positive worldwide economy underlying the bedding industry. We are pleased with the progress of our new product launches around the world and the positive early market reactions.”

“Eight consecutive quarters” just about syncs with the amount of time we’ve worked with Tempur Sealy. But I’m sure that’s mere coincidence. 🙂

For more bullish financial analysis, take a look at the industry publication BedTimes. 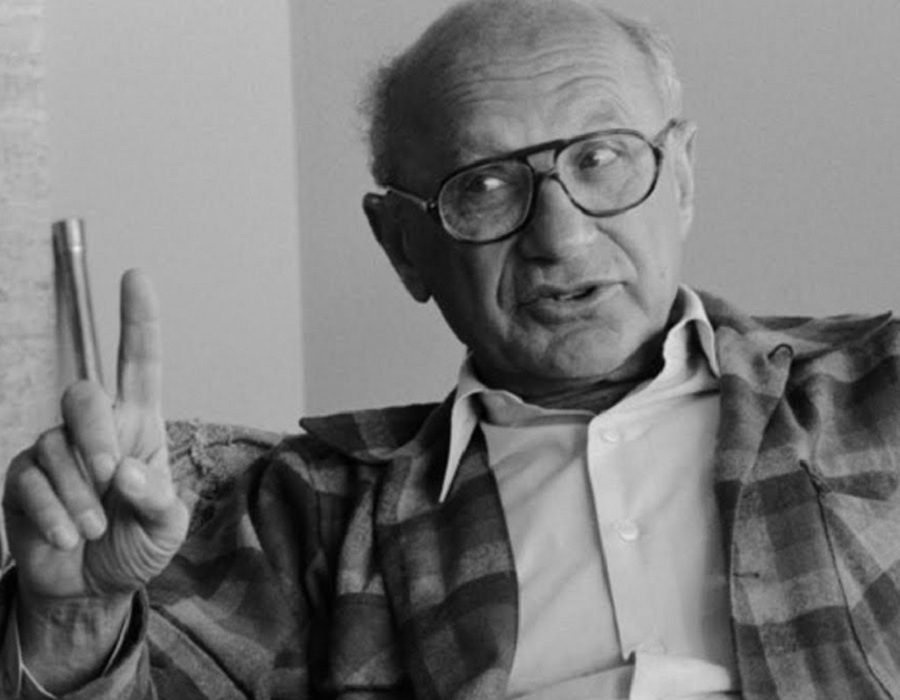 I read Seth Godin’s blog every day. I think he’s smart and we share most of the same values. Today’s post is a wonderful example of that. Its insight is simple but profound.

The renowned and (in many circles) revered economist Milton Friedman made an argument half a century ago that says this: “there is one and only one social responsibility of business – to use its resources and engage in activities designed to increase its profits…”

Since then, business school deans, the Harvard Business Review and Fortune (among others) have published rebuttals. But, as Godin points out, the interesting thing is that this corrosive, destructive point of view has been used to justify irresponsible actions by many, many corporations since it was published. Why? It’s simple. It lets people off the hook. It gives them permission to act like brats. To pillage the rest of society, take the spoils and run. With impunity. What’s not to like, if it applies to you?

But if the human beings who run companies can’t find a way to act like human beings, then it’s incumbent upon the rest of us to protect our larger society from them. We do that in other areas where we see societal damage: We can’t put melamine in baby formula. We can’t sell cigarettes to children. We have building codes. Hell, we carefully regulate near-irrelevant areas like sports. So why should corporations be immune from accountability?

I’m not suggesting we prohibit profits. Just that we insist they be tempered with other obligations. The same ones we live with as individuals. Here’s Seth Godin’s suggestion:

A business is a construct, an association of human beings combining capital and labor to make something. That business has precisely the same social responsibilities as the people that it consists of. The responsibility to play fairly, to see the long-term impacts of its actions and to create value for all those it engages with.

This sounds like a great starting place to me. More here. 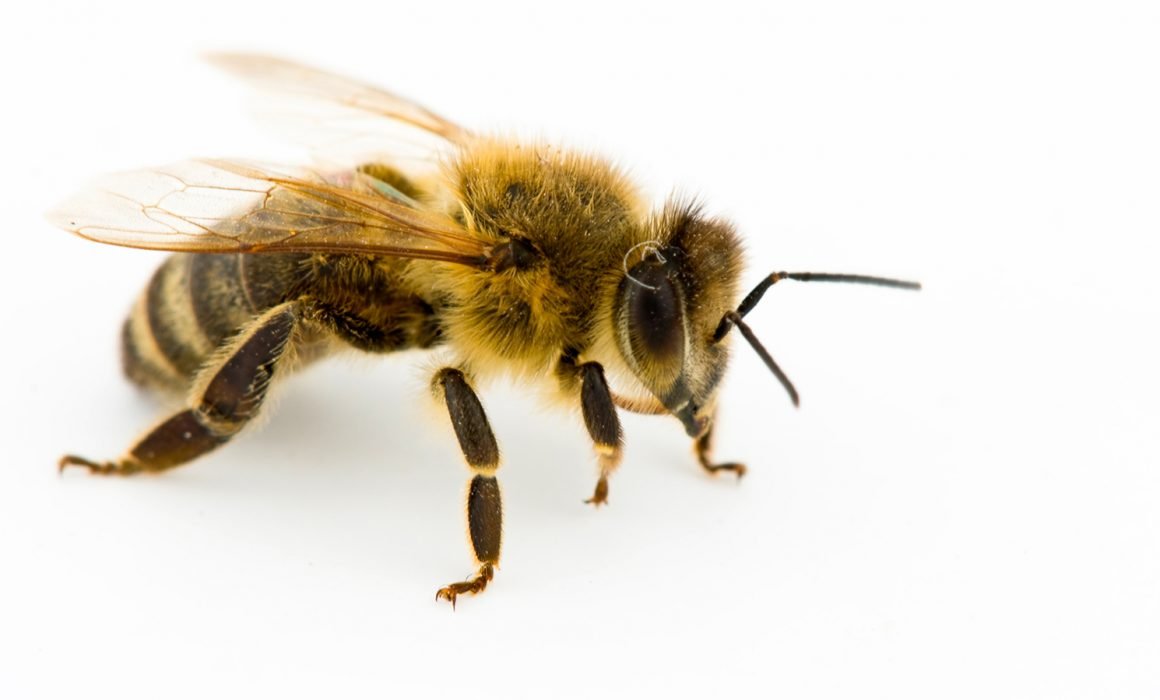 Does the bee die-off freak you out? It should. Bees are essential pollinators and they’re a huge part of why we have fruits and vegetables to eat. California farming without bees would be a disaster. But between April 2015 and 2016, the United States lost 44% of its bee population.

Now, at least one invention is helping. It’s a clever concept — a foldable, easy to set up, baited hive that attracts swarms and keeps them in the area, so farmers can be a little more assured that they’ll be able to continue to grow our food.

It’s another example of how design thinking can make a huge difference in the world. Check it out. 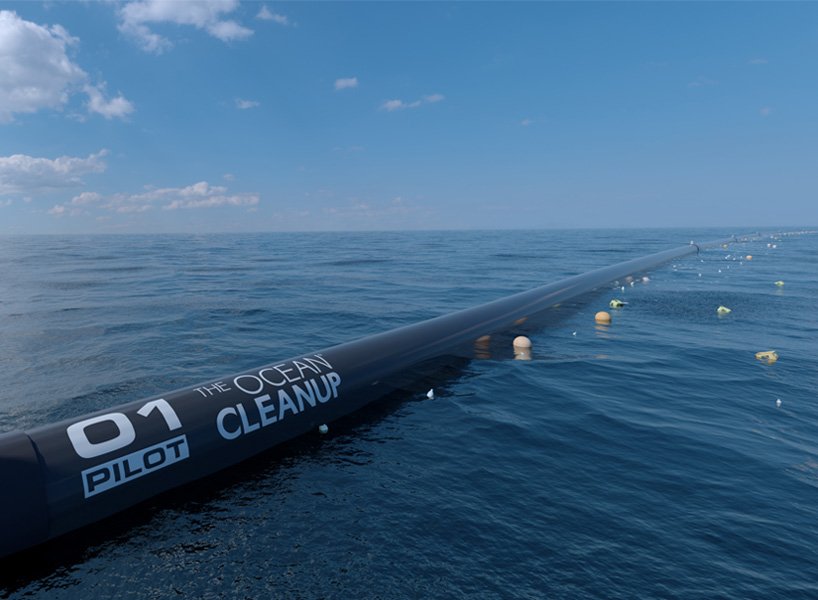 It looks like the young inventor Boyan Slat has improved his incredible design to efficiently extract plastic from the Pacific gyre. The project goes into action next year. And if all goes as planned, the enormous pile of plastic floating in the Pacific Ocean will be reduced by 50% in 5 years.

Considering the Great Pacific Garbage Patch covers such a huge area, that is simply amazing.