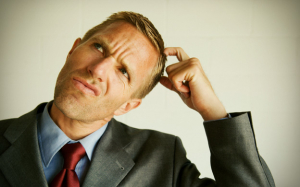 In developing language, humans ran into a design problem: what to do when the communication process breaks down? How can we quickly and efficiently indicate that we don’t understand what the speaker has said, without interrupting the entire flow of the conversation?

“You can’t have a conversation without the ability to make repairs,” says Herbert Clark, a Stanford psychologist. “It is a universal need, no matter what kind of conversation you have.”

Scientists at the Max Planck Institute recently studied 10 widely varied languages around the world to see if the need is universal. Turns out, it is indeed.

Whether you speak Spanish or Mandarin, Icelandic or Cha’palaa, Russian or Siwu, you need a word like “Huh?” In all 10 languages, there’s a short “ah”- or “eh”-sounding word that often starts with an “h” or a glottal stop and is asked as a question to mean, “I don’t understand what the hell you’re talking about.” Quick and efficient to pronounce, and universally understood, it’s a minimalist signal designed to keep the conversation moving.

To quote Amina Khan in a fascinating article in the LA Times:

Without something like “Huh?” a conversation could be quickly and irreversibly derailed at the slightest misunderstanding. That would be bad news for a highly social species that relies on good communication to survive.