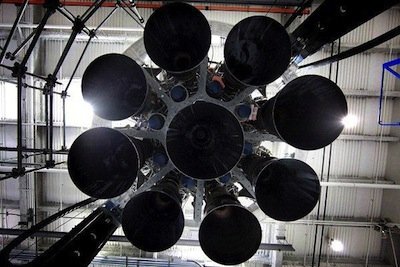 Last week, a few of us from AIGA were lucky enough to be offered a private tour of SpaceX. It was like visiting the future, or being inside a special-effects blockbuster movie.

I’m sure my description reads like the fanboy I am. Bear with me.

We started by checking out a rocket engine. They’re big, but not as big as you’d think. Much smaller than a jet engine on a 747 for example, but far more powerful. And there are clusters of them inside the rockets. So the net result is huge thrust. They burn off all the fuel in that whole giant rocket fuselage in just a few minutes at launch.

There’s a stairwell behind the all-glass elevators that holds a Cylon and an Ironman suit. The brand new, quite large cafeteria area is full of cool Jetsons-ish chairs.

Attached to the opposite wall as you enter the factory is a massive, 25-foot carbon-fiber strut which Scott, our guide, helped design. This strut is one of four that form a sort of tripod (quadrapod?) — a relatively stable base on which the rocket can land and be re-used.  It’s attached, in position, to the base of a photomural Falcon stage (I think) so you can see how it’s deployed.

Hanging above your head is a used capsule with the tiles burned off from re-entry into the atmosphere.

Entrance to the factory floor featuring a used payload capsule and the giant landing leg strut thing — not yet mounted to the wall mural.

The scale of the factory and its contents is hard to imagine unless you’ve been someplace where they make jet airliners. The plant is huge; the rocket parts are the size of rooms. And there are a lot of them within this enormous building.

We watched workers hand-apply carbon-fiber material to an aluminum mold the size of a semi trailer. All the fuselage sections are on circular rollers so they can be rotated to any position, so that workers can reach the part they need to work on. There are “carts” (?) the size of multiple flatbed railroad cars on which they haul the rocket sections around.

They have multiple enclosed arc-welding stations behind tinted glass and a sign that cautions you not to stare at the arc or run the risk of blindness (!)

There were guys assembling engines while referring to large computer displays with 3-D renderings of the pieces they were working on.

Engines being assembled in an Octaweb harness

There was a robot carefully inspecting one of the fuselage sections for flaws in the carbon-fiber skin.

There’s a clean room in which they assemble the smaller parts, especially the payload capsules.

There’s a multistory office building with all-glass facades that rises out of the center of the space and gives people an overview of the factory floor for their offices. Apparently it’s very noisy when things are in full production.

I’ve included some (older?) pix from Google…we weren’t allowed to shoot any on the tour. But it’ll give you the idea, sort of. It’s actually visually cooler and more designed-looking that you can tell from these photos.

All in all, a wonderful experience. Thanks again to Scott and everyone at AIGA who helped make it happen.